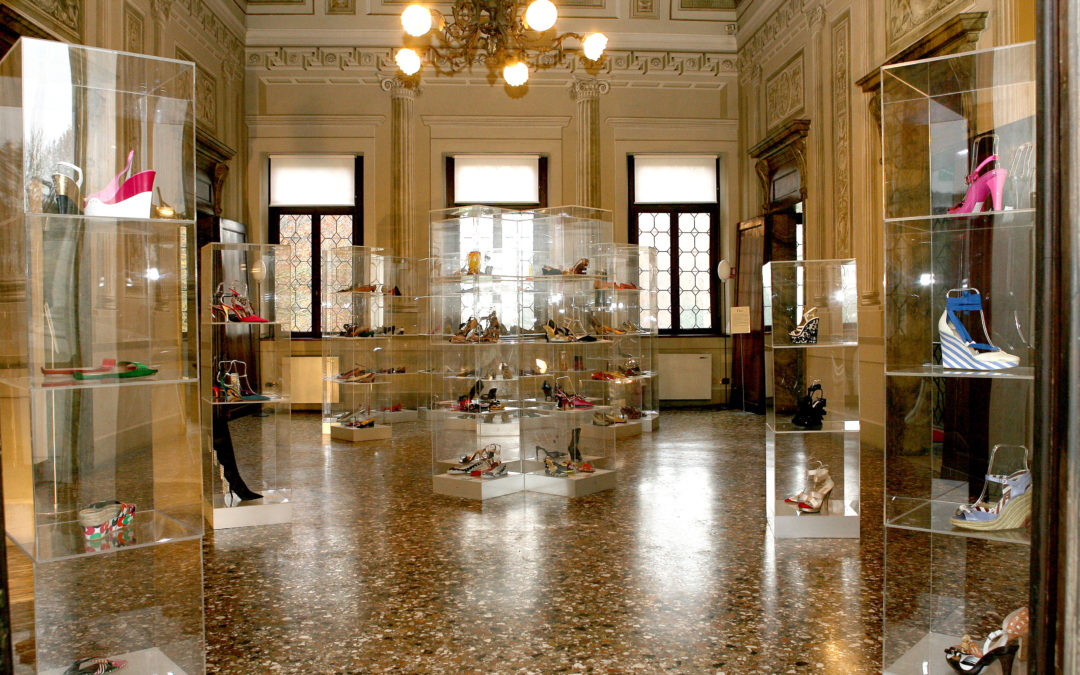 The Shoes Museum, protagonist of the collateral exhibition “In her Shoes. A walk through the history of footwear” , previews some of the special pieces that will be on display in Parma.
We cannot help wondering what alleys and districts were trodden on by the 18th-century Venetian shoe in kid skin and hemp, complete with patten, now housed at the Villa Foscarini Rossi Shoes Museum in Stra, in the heart of the footwear district of Riviera del Brenta.

This antique shoe is a world away from the modern pumps from the 2018 spring-summer collection kept at the Stra Museum, created by the stylist Clare Waight Keller for Givenchy, with the heel counter rising upwards to elongate the line of the leg.
These are just two of the many pieces that will soon be on display at Mercanteinfiera, on the occasion of the collateral exhibition “In her Shoes. A walk through the history of footwear”, scheduled from 5 to 13 October at Pavilion 4.

Guests at the international Exhibition of modern antiques, antiques and collectibles will also be able to admire – after the restoration work by the “Open Care – Art Services” Workshop – a preview of the Swarovski encrusted shoes designed in 1969 by the stylist Marc Bohan for Christian Dior.

Together with the Villa Foscarini Rossi Shoes Museum, Fiere di Parma is thus opening its doors to an exciting women’s journey, which ranges from the late 17th-century footwear of Venetian noblewomen to the Blade Runner-inspired sandals created by the British Nicholas Kirkwood. 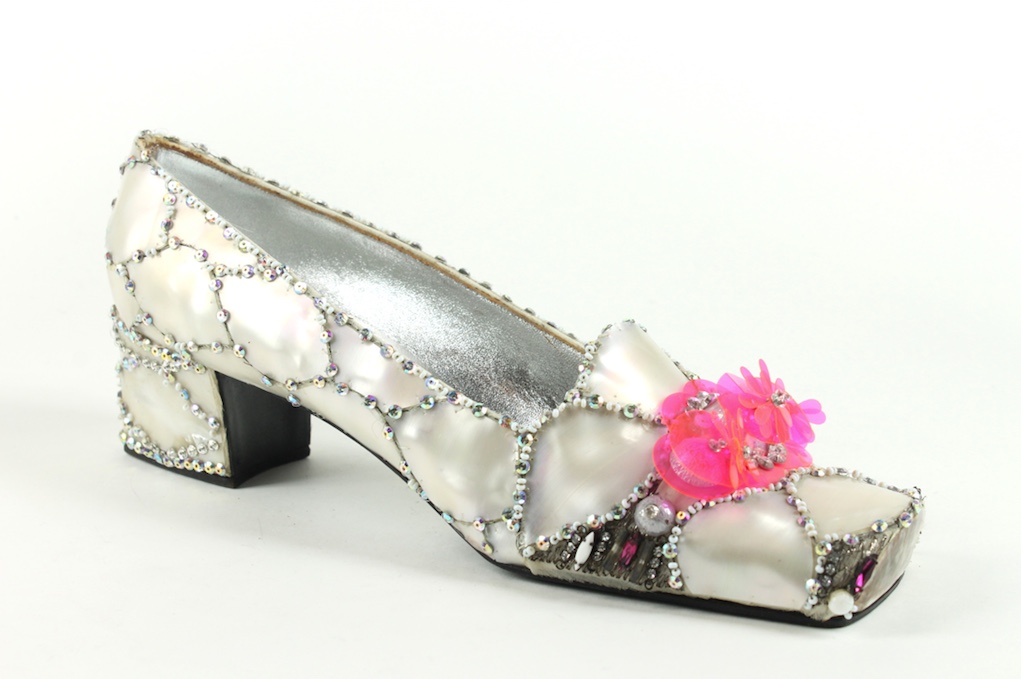 There will also be a scarf designed in 2013 by Phoebe Philo for Celine, which evokes Elsa Schiaparelli’s famous black python gloves created in 1936 – inspired by Pablo Picasso’s surrealist work of 1935 – and later made in a golden version with claws and rings for the fingers.

Now try to imagine, on the other hand, what foot embellished the antique sandal of the “Basketmaker” period of the Anasazi Culture – dating from between 200 BC to AD 400 – discovered in 1963 in a dry cave near Alamogordo, New Mexico.

It is a rare example of a “fishtail” shape worn only on the front part of the foot, made with woven yucca plant stems and characterized by a strap similar to those used today.

The latter is the oldest footwear housed at the Villa Foscarini Rossi Museum, alongside the 1500 women’s shoes produced by the Rossimoda company from 1947 to the present and which trace its entrepreneurial journey, its collaboration with the most prestigious international fashion houses and its reliance on the skills of local craftsmen, whose illustrious tradition harks back to the School of the Venetian “Calegheri” – a guild of luxury shoemakers founded in 1260.

Those wishing to travel from Parma to Stra, where the museum is located, will be able to browse through the many other shoes produced by the collaboration between the company and the greatest stylists in the world, as well as a small collection of footwear dating to the 18th and 19th centuries.

A really fascinating display awaits visitors of this museum that was opened to the public in 1995 on the occasion of the company’s fiftieth anniversary, on the initiative of Luigino Rossi, owner of the eponymous shoe factory.

Visitors are particularly struck by the gentle marriage of art and fashion, as the Museum is housed in Villa Foscarini Rossi, an elegant 16th-century architectural complex in the middle of the shoemaking district of Riviera del Brenta.

The thematic itinerary, which emphasizes the contribution of the individual fashion houses with separate rooms dedicated to each of them, interacts with art, represented by the decorations of the 17th-century architectural complex.

From the first two rooms on the ground floor – containing the engravings of G.F. Costa in The delights of the Brenta, the collection of historical shoes, and footwear from the early twentieth century – one moves on to the creations by Donna Karan, Marc by Marc Jacobs and Nicholas Kirkwood, and to the Porsche room. Here the unisex shoe made for leisure time, driving the car, and going for walks, reminds us of the friendship that linked Ferdinand Alexander Porsche and Luigino Rossi.

Assisted by Saint Crispin, the patron saint of shoemakers, whose reliquary is held in the private chapel, visitors continue their journey into the history of footwear at the old cobbler’s workshop and the pattern maker’s table – with the colour charts, catalogues, accessories and die cast moulds that document the evolution of modern times – and in the Egyptian room embellished by 19th-century decorations inspired by the travels of the previous owner of the villa, Negrelli, a nobleman from Verona.

While the room of the American stylist Anne Klein sets up a dialogue with that of her compatriots Richard Tyler, Calvin Klein and Vera Wang (the latter the creator of the sandals designed for the actress Sharon Stone), the stiletto heels launched by Roger Vivier for Christian Dior make way for the fanciful creations of Christian Lacroix and Emilio Pucci. Pride of place in the Givenchy room is given to the precious red satin pump shoe decorated with white pearls, reminiscent of the low-heeled evening shoe introduced in 1962 by the stylist who was inspired by his “muse” Audrey Hepburn.

The last three rooms, a homage to the French stylist Yves Saint-Laurent, who had a long history of collaboration with the shoe company, show the evolution of footwear in the last 40 years.

If you go to Foscarini Rossi Villa, don’t forget to visit the Foresteria (“guest quarters”) – today a convention centre – where the Foscarini noblemen used to welcome their guests in the ballroom, frescoed in 1652 by the quadraturist Domenico de’ Bruni from Brescia with a magnificent display of perspective.

The Museum was born initially as the company’s “best salon”, in which to welcome important clients and brand licensees. Today the collection has expanded its audience, with educational workshops aimed at schools and the occasional tourists visiting the buildings, which are included in the circuit of Venetian Villas open to the public. Since 2003 the architectural complex Villa Foscarini Rossi and the Rossimoda factory have belonged to the luxury financial group LVMH, which with great determination continues to spread the footwear culture of this area.

Meanwhile, unmissable gems await you at Mercainteinfiera, for an unexpected journey into the shoemaking tradition of Riviera del Brenta, but also into the history of fashion and costume from the second half of the 20th century to our days.